In late 2006, the Punjab Govt of Mr. Pervaiz Elahi and it's Excise and Taxation department introduced new number plates for motor vehicles. The rationale  behind this intervention was to put computer readable number plates on all vehicles in order to have better vigilance through CCTV cameras. The number plates are issued for four categories (see image below). 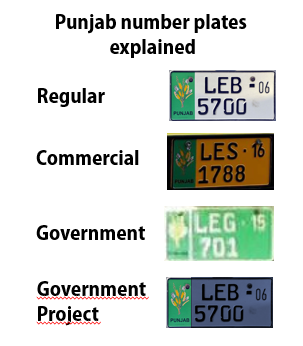 The system functioned smoothly before the 2011 debacle when the contractor (3M) providing these plates was "blacklisted", which put a halt on computerized number plates being issued to commuters. For the period between 2011 and 2013, the system remained suspended and Excise department was only too happy to provide the vehicle registration number so buyers of new vehicles could get a counterfeit number plate made from street-side vendors.

In 2014, another department of the Government decided that it was time to change number plates of Punjab. Various newspapers were fed stories of "special US-like" number plates to be rolled out. Fortunately, nothing materialized and the E&T department has stuck with its original design.

There are two parts to this story: the sad one and the good one. The sad part is that while we never got a computerized number plate (during 2011 and 2013), we had already paid for it when getting the registration number. The good part is that we can now get the authenticated plates from E&T dept (Farid Kot House), free of charge*. Why I put an asterisk next to free of charge is because while you don't pay for the plates in monetary terms, it was a hassle just to get hands on them.

When I entered the office to get these plates in 2016 (having paid for it in 2013), I was guided by an efficient yet geriatric receptionist towards the back office. Although there was a board listing which offices were found on what floor, it was impossible to make any sense of it. I wandered a bit before asking a person sitting outside an office (possibly a Naib Qasib), about where I should go for number plates. The person informed me that the same could be received from the upper floor. When I climbed the stairs, there was no guidance here as well so I had to ask another gentleman who asked me to move one floor higher. Having reached the top floor, I was thankful that I couldn't be asked to go higher, but the person dealing with number plates, after seeing my registration year asked me to go to the first floor.

After having no luck on the first floor, I approached the office of "director", who asked me to meet a Mr. Adeel Amjad on this very floor. After reaching Mr. Amjad's office, where he wasn't present, I was asked to meet Mr. Aslam Nadir. Mr. Nadir was busy dealing with number plates and was a bit agitated at Mr. Amjad's staff for having referred me towards him. In order to end the ordeal, I asked Mr. Nadir what my next steps should be? He asked me to see a Mr. Imran in the basement.

After consulting a few more Naib Qasids, I was able to locate Mr. Imran, sitting in a hidden office lined with number plates. Mr. Imran kept entering new number plates into his record register. After 5 minutes, he was able to find time to ask me my problem. I handed my registration to him, with which he disappeared into the backroom. During this time I kept thinking whether or not my number plates would be here, since there could be millions of other places where it could be. Interestingly, Mr. Imran returned with my set of plates and handed them to me. It was surprising that he found 3-year old plates in less than two minutes although the mess in the backroom made it seem impossible. So after 30 minutes of exercise ascending and descending stairs, I had what I came to get.

The E&T department needs to do the following:


Certain interventions have been proposed by certain "units" in the Punjab Government in "collaboration with the E&T department" which can be at best described as frivolous. DVRS, VVTP culture and Excise 2.0 Vanity plates are two examples of the branding used. Although such interventions are not harmful per se, they serve more as initiatives to be reported in the press rather than initiatives that would lead to any real change.

The same "units" claim to have changed the motor vehicle tax payment system. However, as I've described, the masses have to go through the same ordeal to get their number plates. The same applies for registering a new vehicle, transferring ownership, paying yearly token taxes.

Putting a sticker on the car doesn't mollify the pain suffered to get that sticker in the first place. Vanity plates may be ubiquitous in the US, but so are proper driver license and vehicle fitness tests, something the "units" and Punjab Govt have claimed to address but only in newspapers, not in reality.
Posted by Jack at 6:32 AM