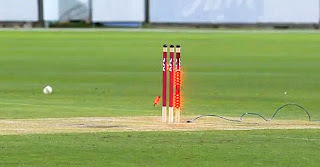 Zing Stumps are the new IN thing at Big Bash 2012. As seen in the photo, the stumps light up when the bails are dislodged.
I wasn't surprised to see the Zings, as they are called, in the Big Bash. After all, it was the Australian Cricket Board which first experimented with coloured clothing (thanks to Kerry Packer) that we now take for granted. Then was the use of floodlights, under which the 1992 world cup was played.
In 2006, the hotspot was also used for the first time in Australia during the Ashes. Flashing stumps are the latest addition to the list of innovations.
Moreover, Zings are not the only new technology being used this year in Big Bash. There are other smaller additions like the FoxKopter camera and helmet cameras. To be honest, I'm not a fan of different camera angles but the stumps seem to be an additional entertainment. Their purpose is to help stumping decisions but they surely will add to the cricketing flavor.
Posted by Jack at 2:30 AM No comments:

The problem with the Decision Review System (DRS)

After years of hotch potch measures and criticism from cricket fans, the International Cricket Council introduced the Umpire Review System in 2008 during the India-Sri Lanka test series. The system became controversial from the first test, with the Indian team censuring the ICC for using a half baked system. As of 2012, the method has become a lot more sophisticated and more accurate, but the BCCI still finds it flawed.
The problem that I see with the current system is not its accuracy. Rather, its the number of reviews allowed per team. When the system was introduced, each team has 3 reviews per innings in Tests. But now that number has been reduced to 2 reviews per team per innings in tests and 1 review in ODIs and T20s.
Due to the low number of review opportunities, teams usually exercise extra caution when going for the TV umpire's opinion as a single wrong review in ODIs means that you will have to go without the review opportunity for the whole innings. This leads to teams not going for referrals unless they are 100% sure of the decision going their way, causing wrong decisions remaining as they are. An example was seen in Pakistan's third ODI vs Australia when Pakistan did not review Billy Bowden's decision on an LBW whereas the TV replays showed that Michael Hussey was out. Such events defy the basic logic behind the introduction of the DRS. The ICC should at least make it 2 reviews per innings per team in ODIs and T20s.
Posted by Jack at 12:33 PM No comments: 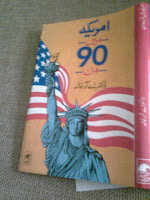 The man who brought colours to cricket

In 1976, the Australian Cricket Board (ACB) turned down Kerry Packer's offer for broadcasting international cricket in Australia. Packer was the owner of Nine News Networks. What followed was to change cricket forever.

Disheartened, Packer decided to start a rebel league by signing international players like Tony Greig of England, Greg Chappel of Australia and player from West Indies and Pakistan. Revolutionary changes were brought to the game. Floodlights, drop in pitches, helmets, white balls and coloured clothing were used; all these were unheard of in cricket.


Players from Pakistan and Australia were banned by their national boards, whereas those from West Indies, South Africa, England and New Zealand were kept in the national side. The ACB's stance of no tolerance was shaken, and they were forced to make a compromise in 1979, granting the rights to Packer's Nine News network.

In the backdrop of the pact between the two sides, Australia hosted the Benson & Hedges World Series Cup in November 1979, inviting West Indies and England teams to participate. This was the first 'recognized' international cricket series to feature coloured apparel and day/night matches. Hence, Australia became the first nation to introduce coloured apparel in one-day cricket.

Later, the 1992 Benson & Hedges World Cup, also held in Australia, was the first World Cup to feature coloured clothing. Many countries followed suit and started organizing day/night ODIs which featured coloured clothing and floodlights. Finally, in December 2000, the last ODI featuring white flannels was played. Hence what carries on till today, is the legacy of the Great Kerry Packer.
Posted by Jack at 9:54 AM No comments: